When The Doctor's Wife was first published in 1864, Mary Elizabeth Braddon was well known for her scandalous bestseller, Lady Audley's Secret. Adultery, death, and the spectacle of female recrimination and suffering are the elements that combine to make The Doctor's Wife a classic women's 'sensation' novel. Yet it is also Braddon's most self-consciously literary work and her rewriting of Madame Bovary. Like Emma Bovary, Braddon's heroine, Isabel Gilbert, is trapped in a marriage to a man incapable of understanding her imaginative life. But Braddon's novel differs vastly from Flaubert's in the nature and consequences of Isabel's 'affair'. 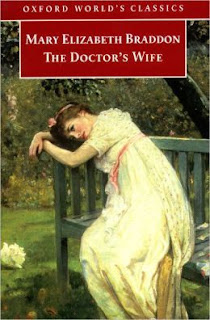 I hesitated between giving this novel 2 or 3 stars, but I finally decided upon 3 because it was a group read, which has its disadvantages when you're reading a book you're not particularly fond of. What I mean is I was supposed to read it in a month and a half, a few chapters a week. When I was finally getting into the novel, I had to put it down to wait for other readers and I'm pretty sure I would have enjoyed it more if I had read it in one go. Considering I hardly participated in sharing my feelings in this group, because I was just not feeling great at the moment, I should have read the book at my own pace.
This is a Victorian retelling of Flaubert's Madame Bovary - that I DNFed recently. It was written by the prolific Mary Elizabeth Braddon, who has gained fame as a sensational novelist, and who, this time, tried for something different. There was sensation inside, but mostly in the shape of Sigismund Smith, a sort of parody of herself, I presume. I actually enjoyed his character very much !
"I think there ought to be a literary temperance pledge by which the votaries of the ghastly and melodramatic school might bind themselves to the renunciation of the bowl and dagger, the midnight rendez-vous, the secret grave dug by lantern-light under a black grove of cypress, the white-robed figure gliding in the grey gloaming athwart a lonely churchyard, and all the alcoholic elements of fiction."
" (...) he ventured to remark that the spot was so peaceful it reminded him of slow poisoning, and demanded whether there would be any objection to his making the quiet grange the scene of his next fiction,—the cordial cheery host cried out, in a big voice that resounded high up among the trees where the rooks were cawing, "People it with fiends, my dear boy ! You're welcome to people the place with fiends"
The book includes a lot of repetitions (for example, "she was trying to be good" !!) and it sometimes felt like the author was trying to hammer thoughts into my head, something I didn't need. The "heroin" was not bad (hey, she was trying to be good !), just not educated, reading only silly novels and, finding life too dreary, practised literary escapism at any opportunity. She was simply not good... with reality ^^ Isabel mentioned a lot of novels and characters, most I never read or heard about, but it doesn't prevent the reader from understanding the geist of things. The "hero" wasn't dashing - he was mostly a bored young man who didn't even try to find purpose in life. The doctor wasn't a bad man either, he was just devoid of imagination and trying to fit his life into the mold left by his father :
"He had married this girl because she was unlike other women ; and now that she was his own property, he set himself conscientiously to work to smooth her into the most ordinary semblance of every-day womanhood, by means of that moral flat-iron called common sense."
But of course, everything didn't happen as he wished it :
"if a man chooses to marry a girl because her eyes are black and large and beautiful, he must be contented with the supreme advantage he derives from the special attribute for which he has chosen her : and so long as she does not become a victim to cataract, or aggravated inflammation of the eyelids, or chronic ophthalmia, he has no right to complain of his bargain." I really appreciated the author's sense of humour !
Isabel was not very knowledgeable or particularly intelligent, but her education and her life didn't give her the opportunity to be different. The pressure of being a wife in a small country village, leading a boring and repetitive life didn't help. When she tried to change small bits of her life, she didn't have the necessary freedom to do so. Her husband, her husband's servants, the village gossips, nobody took her seriously but nobody did anything to help her change - she was still very young. Yet, when she was given an opportunity, she learned (the Mordred library).
How can I talk about the ending without spoiling ?... First, let's mention that this novel didn't end the way Madame Bovary did, and I liked the way it ended. I can see why some feminists like it too. It was implied that if someone like Isabel could manage to change her life and improve her character, anybody could - and by that, I mean every woman. The intentions of this book were good, I just wish the author hadn't expanded them in too many pages, this novel would have been much better if it was shorter. And I wish we had more Sigismund Smith ! The author had fun with him and so did I.
Posted by IzaBzh at 11:34