Pretty, impecunious Mary Preston, newly arrived as a guest of her Aunt Agnes at the magnificent wooded estate of Rushwater, falls head over heels for handsome playboy David Leslie. Meanwhile, Agnes and her mother, the eccentric matriarch Lady Emily, have hopes of a different, more suitable match for Mary. At the lavish Rushwater dance party, her future happiness hangs in the balance. 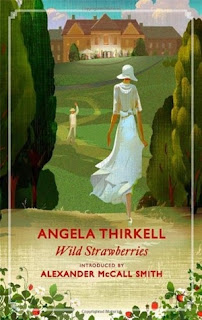 I was in need of a light, fluffy and funny story this week-end and this fit the bill perfectly. It's not the novel of the century, but a sort of romantic comedy filled with deliciously eccentric characters. Next time I need a relaxing read, I'll think of this author !
How did I come to read this ? I happened upon this short novel at the bookshop, the cover was lovely, the blurb mentionned a big house in the English countryside between the two world wars, which was all good. Reading about the author, that I'd never heard of before, I learned that her mother was the daughter of Edward Byrne-Jones (the preraphaelite painter), Angela was also Rudyard Kipling's cousin and J.M. Barrie's goddaughter. She was really famous in her time but not many people know her nowadays.
It was a wonderfully delightful read that made me smile and laugh from the beginning, with a light touch of emotion here and there. Even if I heard that all her novels aren't great, I intend to find out more about Angela Thirkell.
Posted by IzaBzh at 18:19