Elizabeth Gaskell's biography of her close friend Charlotte Brontë was published in 1857 to immediate popular acclaim, and remains the most significant study of the enigmatic author who gave Jane Eyre the subtitle 'An Autobiography'. It recounts Charlotte Brontë's life from her isolated childhood, through her years as a writer who had 'foreseen the single life' for herself, to her marriage at thirty-eight and death less than a year later. The resulting work--the first full-length biography of a woman novelist by a woman novelist--explored the nature of Charlotte's genius and almost single-handedly created the Brontë myth.

Elisabeth Jay's introduction discusses Gaskell's artistic construction of The Life and its lasting influence. The text follows the controversial first edition of 1857 throughout, and all the variations of the revised third edition are contained in an appendix. 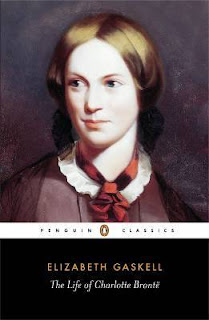 This book is particularly interesting to me because it combines two factors : one, Elizabeth Gaskell *and* Charlotte Brontë (two for the price of one) ; two, this is the first biography that a man (Patrick Brontë) asked a woman to write. Apparently, no woman novelist had written a biography before about a woman novelist. It was published in 1857, so 2 years after Charlotte's death.

This is a strange biography : at the very beginning of the book, Elizabeth Gaskell tells us about Yorkshire and its inhabitants and it's really funny ! Because she was well bred and respectable and the people of Yorkshire tended to be... rougher. At least, the one she chose to describe, I'm afraid she was an unreliable narrator, she chose a certain aspect of life in Yorkshire to display.

Then she moves on to the life of Charlotte. She visited people she knew, she wrote to her friends, she gathered information, of course she talked with her father (I'm not sure she really liked him ?) and so we learn about her childhood and that of her famous siblings. But as soon as we reach the stage when Charlotte has made friends and corresponds with them, there are a lot (and I mean a lot) of letters, commented by Elizabeth from her point of view.

Since Charlotte's father was at the origin of this biography, and Elizabeth was a friend of Charlotte, there are certain details that you feel she holds back out of delicacy I guess (and fear of trials), about Branwell of course - he's barely there, but not only. Reputation was important in those days so never lose sight that the biography was subjective. One detail pops to my mind (not written, I learned otherwise) : Elizabeth never let her own daughter read Jane Eyre before she turned 20 ! Charlotte in here is portrayed as a rather depressed, but a very wise and obedient daughter - she lacks the spark that must have existed when you read her books and see her personality shine through. Even if I think that her mental health must have been in cause (but hey, dead mother, dead siblings, sick father, ill health, gloomy winters), not only her physical health as Elizabeth says. But still, you catch a glimpse of that spark here and there. And you know that Charlotte was her father's daughter : he left Ireland at a very young age to make a life for himself, Charlotte, obscure daughter of a Yorkshire clergyman, managed to bring her sisters' books and her own to lasting world wide fame. She must have felt trapped in the monotony of her life as the eldest daughter replacing her mother, literature was a means of escape.

What shocked me was how unsanitary Haworth was, not only because of the weather, the cold, the lack of heating, but also because apparently when it rained, the waters washing the cemetary contaminated the town's water supplies (anyone who has seen pictures of Haworth will understand why, there's a very steep road there) ! No wonder so many people died young in this family and in the surrounding neighbourhood. At one time, there were eight people buried in one day in Haworth !

As a conclusion, I would say that it's a very interesting biography, not only when it comes to Charlotte, but also about Elizabeth herself and the era they were living in and the memory they wanted to leave for posterity. It's worth reading also for Charlotte's letters and the stories you learn, details about her life, how she and Elizabeth Gaskell's daughter held hands when they were together - some things that make her more alive to us, more human.

I don't intend to read this biography only. I heard that Elizabeth's book was making a saint out of Charlotte, now I have Laura El Makki's biography, who I heard was turning Charlotte into a villain, then I have the book written by Peggy Hewitt who worked at the Brontë parsonage. Those two are on my shelves, but I'm mostly looking forward to reading Juliet Barker's books - the ultimate reference, so I heard. Great reads to come !