William Crimsworth is an orphaned young teacher, with no family to direct his ambitions. As he attemts to forge a new life in Brussels on his own terms, William discovers his independent spirit in matters of the heart. However, with only his own youthful moral compass as a guide, he soon finds himself caught between desire for Zoraide Reuter, the beguiling head of the girls' school where he teaches, and gentle love for one of his pupils, Frances Henri, as he navigates his own path to happiness and fulfillment. 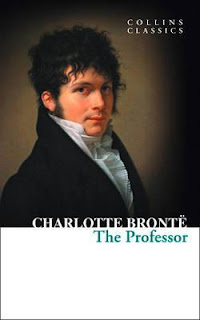 Charlotte Brontë wrote my favourite book ever, Jane Eyre, so I really, really wanted to love this one too, but... The fact that I've already read it and completely forgot about it was a sign !

If you are familiar with her writings and her life, you will find some common themes here, including her weird inclination (but popular at the time) of physiognomy : you take a good look at someone, you know what they're worth, to sum it up. You find instructors, the craving to learn, to better your life and yourself and earn your own independance, the moral righteousness.

She was rather racist with the way she talked about French people (I'm French, but I know it was also a popular opinion at the time and by the way, the French are no better with the English) and Flemish people (I have some Flemish blood !). I didn't really like the main characters. Maybe Charlotte (who published under the name of Currer Bell) wanted to portray William so much like a man would portray a man that she laid it thick. Frances was rather bland, too.

The only character that really stood out was Hunsden. Reading the novel, I felt like he could have been written by Oscar Wilde ! I would have rated this book with 2 stars if it wasn't for him. I adored him, he made my day. And he sounded so much more like Charlotte's favourite people, a bit rude, outspoken, hiding their feelings under a protective shell - more like people I like to read about than well bred people with no imagination or feelings.

My next read by the Brontës will be Agnes Grey. I'm glad I read The professor, for information, but I don't think I will ever re-read it.