Samuel BUTLER : The way of all flesh

Written with great humour, irony and honesty, The Way of All Flesh exploded perceptions of the Victorian middle-class family in its radical depiction of Ernest Pontifex, a young man who casts off his background and discovers himself.

The awkward but likeable son of a tyrannical clergyman and a priggish mother, destined to follow his father into the church, Ernest gleefully rejects his parents' respectability and chooses instead to find his own way in the world. 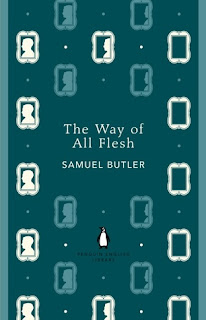 What can I say, it should have been shorter.

I happened (again) upon this novel by chance. It was in our library when I was a kid, I must have read it because I remember the name Pontifex, but the story didn't leave a trace in my memory. When I spotted it on the net recently, I thought I would rediscover a great Victorian novel, alas there was a reason why I'd forgotten it.

The premice is interesting, because it is a semi-autobiographical book and a charge against Victorian society, upbringing, schools (Cambridge), relation to religion, marriage, respectability. Worth taking a look, isn't it ?  The problem is that (almost) everybody is awful in here, or completely uninteresting, as it is the case for the "hero", Ernest. I liked Alethea but she wasn't there for long.

Samuel Butler suffered from the violence of his righteous father, the gentle indifference of his righteous mother and lets us know about it. You feel the anger, the sadness but mostly the bitterness. That he should feel sad and bitter about his parents is understandable, that he should feel sad and bitter about Victorian society who turned a blind eye on such attitudes is understandable, that he should feel sad and bitter about the whole universe except Handel and take opportunity to mock some characters by letting them discourse interminably several times is not. That he writes about a woman who likes a man  better because he gives her a black eye rather than treat her right isn't either. Moreover, the story is told by Overton, a friend of Ernest's aunt Alethea and when he recounts his conversations with Ernest, Ernest is often laughing, jesting with him and it doesn't feel natural, especially when everybody says that Ernest is too grave for his own good. And honestly, I didn't find anything to laugh along with them. It's reported to be a funny novel and it sometimes is, but it's mostly tedious.

If the story had only been about Ernest and his life (hence shorter), it would have gained a star. But the author tends to show how cultivated he is, how much he knows his religious texts and doesn't agree with them, what are his views about life, and I'm afraid I skipped the pages because those parts bored me to death.