Christmas Eve. A time for good cheer - eating, drinking and over-indulgence, an opportunity to bring together families who have grown apart.
The Lee family reunion is shattered by a deafening crash of furniture and a blood-curdling scream. The tyrannical Simeon Lee is found dead in a pool of his own blood, his throat slashed. Despite the festivities, it seems that everyone in the family hated the old man, one of them enough to kill him. 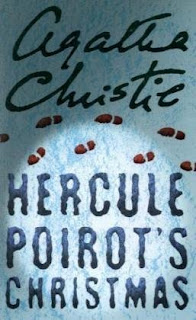 I'm not usually one for seasonal reads, but this year is an exception. Because I had this novel on my shelves - and I plan to thoroughly clean those TBR physical shelves, because it was a group read on Goodreads and because I'm rewatching the Poirot TV series with David Suchet.
And it was nice enough and traditional enough : family reunion, family feuds, family murder, the opposition between the cold  English ways and the more ebullient southern countries, with a couple of strangers thrown in for good measure. I really enjoyed 90% of the novel and didn't mind the repetitions that occurred sometimes (what everybody was doing while the murder took place).
The 10% I liked less was when Poirot explained it all in the end. I'm not going to spoil everything, with the revelations about family members (one, why not, two is too much)  but mostly the way the murder actually happened (far-fetched, to say the least). I didn't guess who the murderer was and it surprised me in a good way.
However, I got a comfort read with a pinch of humour, a cosy mystery that you can read with a hot beverage under a duvet, with a cat or two cuddling with you during a cold season, which is exactly what I wanted so  I won't complain. Not her best, but enjoyable nonetheless.
"Don't harbour the idea that I like murder cases ! Hope I never have another. Anyway, we ought to be safe enough during your visit."
Poirot began modestly :
"My reputation..."
But Johnson had gone on.
"Christmas time," he said. "Peace, goodwill - and all that kind of thing."
Posted by IzaBzh at 10:30