An unruly bunch of bright, funny sixth-form boys in pursuit of sex, sport, and a place at university. A maverick English teacher at odds with the young and shrewd supply teacher. A headmaster obsessed with results; a history teacher who thinks he's a fool. 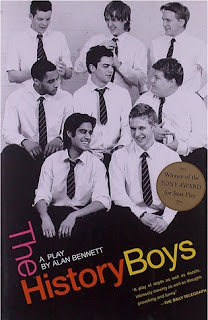 After a few books that kind of let me down, this one was really good. Written in 2002, it takes place back in the 80s and some subjects that could be sensitive nowadays may have not been looked upon with the same concern. It's a play but it was turned into a tv adaptation that is really worth watching, with an excellent cast (but the ending is a bit different) :

It is very witty and erudite, which isn't surprising with Bennett, and such fun to read with a healthy dose of emotion. Each boy has its own personality but of course a few stand out, Daikin, Posner, the underestimated Rudge, and the teachers. Their teachers have done a good job because they come from Sheffield (northern, working class England) and are capable of quoting writers and poems by heart. I come from rather northern, working class France and at their age, I couldn't ! Apart from "Mignonne, allons voir si la rose...", poem that was written by an old man trying to get a young lady into his bed on the count that he was famous (Ronsard - the lady didn't give in, it seems).

Even if you're not that familiar with British classic poetry/literature or history, I highly recommend reading this play. All those boys are full of knowledge, but they want to go to Oxbridge (Oxford/Cambridge), something that is usually out of their reach, and they have to learn to cheat to achieve that. They have to stand out from other students who are trained for that purpose since birth it seems, while they're aren't. What they write is true, but when a teacher corrects dozens of works, which will he remember, the true essays or those who hint that Stalin wasn't such a bad boy after all ? What is really worth it, telling the truth, what you think, or just saying anything that will surprise the teachers, even if you don't believe in it ? Alan Bennett apparently had to deal with this when he graduated and it left a lasting imprint on him.

I would have rated 5 stars but in 2021, having a teacher using his power on pupils to do certain things doesn't agree with us. Maybe it's not really the same because the author is gay and the boys, after all, are adults ? But it bugged me. But I loved the play ! So 4.5 stars, great read.

"Headmaster : There is a vacancy in history.
Irwin (thoughtfully) : That's very true.
Headmaster : In the school.
Irwin : Ah."
"Dakin : Are we scarred for life, you think ?
Scripps : We must hope so. Perhaps it will turn me into Proust."
"Mrs Lintott : History's not such a frolic for women as it is for men. Why should it be ? They never get round the conference table. In 1919, for instance, they just arranged the flowers then gracefully retired."
Posted by IzaBzh at 09:11