With her final novel, Villette, Charlotte Brontë reached the height of her artistic power. First published in 1853, Villette is Brontë's most accomplished and deeply felt work, eclipsing even Jane Eyre in critical acclaim. Her narrator, the autobiographical Lucy Snowe, flees England and a tragic past to become an instructor in a French boarding school in the town of Villette. There she unexpectedly confronts her feelings of love and longing as she witnesses the fitful romance between Dr. John, a handsome young Englishman, and Ginerva Fanshawe, a beautiful coquette. The first pain brings others, and with them comes the heartache Lucy has tried so long to escape. Yet in spite of adversity and disappointment, Lucy Snowe survives to recount the unstinting vision of a turbulent life's journey - a journey that is one of the most insightful fictional studies of a woman's consciousness in English literature. 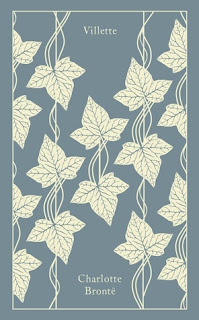 This novel is unequal, so my rating fluctuated as my reading progressed which is why I didn't give it 5 stars - but close.
First, the beginning : I loved it, very good start, engaging, with the description of a family and the arrival of a little girl from the point of view of an outsider. It was lively.
Then, the (unreliable) narrator, Lucy Snowe, had to leave and earn her living by first going to live with an older woman, then by trying her luck as a teacher in the country of Labassecour ("Thebarnyard" - Charlotte did have her fun with the names she picked for the country and many characters !).
Unfortunately, I read The professor just a few months ago and liked it but not loved it. Villette is more or less a rewriting of the same story - more or less, it differs on many points, much to my relief. But after the promising start, I was feeling let down and was afraid this story would be long and dreary.
Reading about Charlotte's life also in the last few months helped me liking the novel better and the more I read, the more I enjoyed. We know that Charlotte had a type, older men with a... strong personality, to put it mildly. I also felt that the doctor looked like her young and handsome "real life" editor, Mr Smith. We also know that Charlotte didn't like Catholics at all, which is not surprising giving her background, so I thought the character of the priest was a nice touch, even if he was nuanced with his personal/religious interest. I really much enjoyed the unreliability of Lucy Snowe as a narrator, she kept me on my toes and made me smile with her reflexions on people but also when she described herself in a way that she would have liked to be described even if the reality was far from it ! I also adored the character of Madame Beck, she's fun to read about and the way she and Lucy Snowe act around each other is delightful.
But most of all, what I absolutely, absolutely adored was the ending - the apotheosis ! Honestly, I didn't expect it (I've read this novel years ago, but then again, my memory is not great). Just for this ending alone, I would have given the book 5 stars. It left me surprised, giddy, happy and slightly... No, I won't say the word because it would be a spoiler.
Oh, what a great novel ! I still love Jane Eyre better, but I'm so very happy I re-read it and will probably read it again in a few years.
PS : I'm posting this review more than a week after having read the book, and I'm still thinking about it, the characters, how it all wrapped up, the unreliability of Lucy, how Charlotte toyed with us and I think I will probably give it 5 stars the next time I read it. Just saying.
Posted by IzaBzh at 11:31